...ah, that would be the left's typical descriptive terms for conservatives.

I recently read an article that noted the stated values of a small Tea Party like conservative group called "The Lincoln Club," and was struck with the simplicity of their purpose:

..."to promote, educate and advance conservative principles of fiscal responsibility, small limited government, free enterprise, the rule of law, private property rights, and the preservation and protection of individual liberty."

I think it pretty accurately describes the core of conservative belief. But, I'm missing the part about fascism, racism, and war-mongering. Indeed, these are the values so feared and abhorred by the clowns of leftland whose worship of wall-to-wall state coercion is threatened by those who favor limits on government authority.

The left in general really loves to see the state move in on anything private. After all, us little people are too stupid to actually make our own choices and run our own lives. I dare say that some "progressives" may be a bit weak in forsight themselves on some occasions. For example, give lots of authority to the government and than look puzzeled or angry when someone else is running the show (this has happend on both sides of the aisle -- solution, don't give government enhanced authority in the first place). It always backfires. I don't think any sane person would want to see the internet fall under the control of the state but, stranger thoughts and goals have occured by some.

For a variety of reasons -- all of debatable merit -- a leftist will always choose subsistence or deprivation over abundance and growth. (though not necessarily for themselves).

The Values of Annoyance

First the Tea Parties and now this. The clowns of leftland aren't going to be happy if this trailer is any indication of what this movie is about. Someone is always interfering with the "path to revolution" with emotional expressions that value freedom. It's rare to see something like this on a screen. The only truly effective anti-communist movie in decades (that wasn't it's intention, it was just conveying a true story) was "The Killing Fields."

It's not that all leftists are devout fans of Mao or communist dictators...it's just that it's fairly typical that they cut such authoritarian regimes plenty of slack. When criticism is made of the pathetic track record of Marx's many clones, the left goes into their default position and turns the conversation around into how terrible America and capitalism are.

Idiots..."useful" (to the socialist cause) or otherwise.

I probably post this cartoon about once every year and still feel it gets right to the matter of those issues and personal values that this blog is so opposed to: 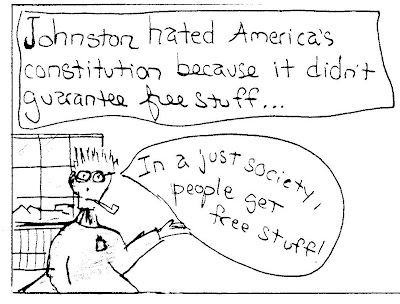 "The urge to save humanity is almost always a false front for the urge to rule."

It stands out as an enduring paradox among leftists that they are both highly critical of (the U.S.'s) government yet proclaim the need to expand it's scope and authority significantly.

The worst thing about dealing with someone who is clearly intelligent and even well-informed is that some of them tend to think that their knowledge automatically makes their judgement superior -- "[They're] smart, so [they're] right."

With a largely left wing intelligencia that regularly shows sympathy to authoritarianism in all its guises and scorn upon the free-wheeling individualism of America it's a hard case to prove that knowledge and wit necessarily means an honest or insightful view of things.

Or, framed in another more revealing way, "The government isn't big enough. We need more powerful politicians, bureaucrats, and government...the state is just too darn small!"

# posted by Promethean Antagonist @ 9:38 AM 0 comments